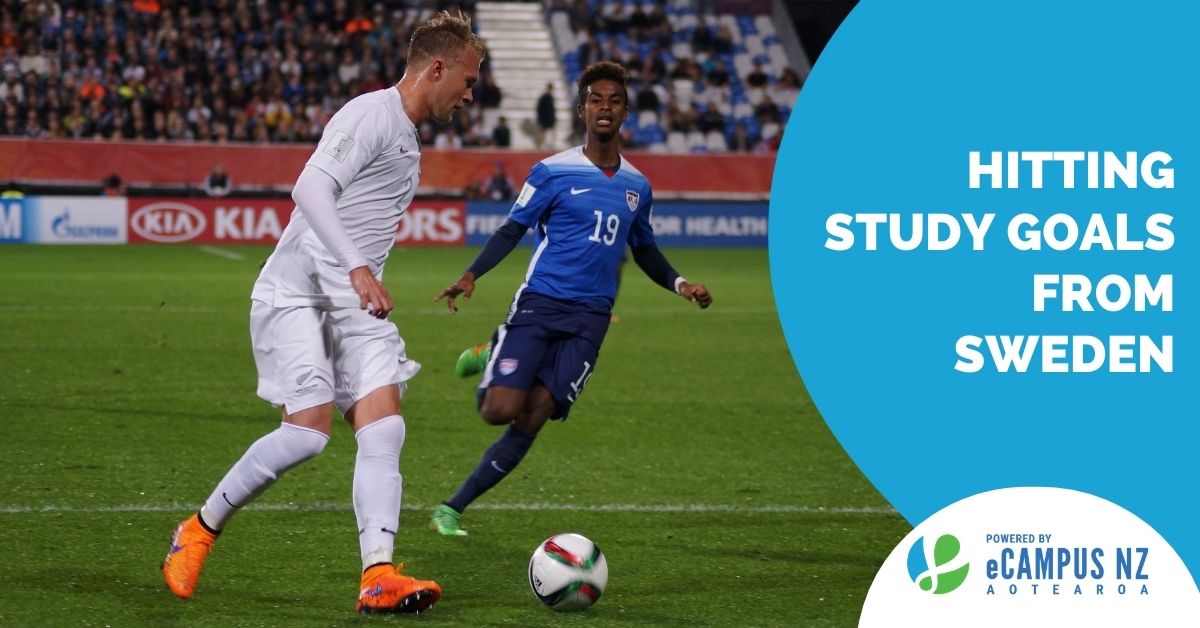 When overseas-based professional footballer Jesse Edge has a goal, he’s willing to put the work in to make it happen.

The 25-year-old Tauranga-born defender’s achievements on the field are impressive. In 2015, Jesse played in New Zealand’s 2015 FIFA U-20 World Cup team before jetting off to Europe to pursue a career in professional football.

Since then, Jesse has played for professional teams in Italy, Holland, and Czech. He joined his current team with Swedish club IFK Berga, in August 2020.

But Jesse’s goals and achievements don’t end there.

Jesse is also completing online tertiary study through NMIT, on the New Zealand Diploma in Business (Marketing and Sales).

While he’s already landed his dream job in professional football, Jesse’s decision to study business was guided by his future goal to build a company that helps players in New Zealand and Oceania land professional opportunities in Europe.

“I’d love to give back to New Zealand players, and from my personal experience I know how difficult it is to get over here,” he says.

Keen to find a study option he could work around his professional commitments, Jesse decided to study online.

“As a professional football player, we’re training for a couple of hours a day, so we have a bit of down time,” says Jesse.

“We have deadlines, but it’s been really flexible so I can work it around training. I study when I have the time, even if that’s on the bus on away trips.”

Jesse’s dedication to his study has drawn the attention of his course facilitators, who noticed that he stayed up until midnight to attend an introductory Zoom session for one of his courses.

For Jesse, this commitment to achieving his goals is his natural default.

“I really want to make the most of the opportunity. I’m very motivated to do well and to get through the study. It’s been a really positive experience so far,” he says.

Alongside full-time study, Jesse trains every day. He also plays up to three games a week as the teams in his league catch up on games missed as a result of Sweden’s COVID-19 lockdown.

Jesse is feeling positive about his online learning experience so far.

“I’m loving it. It’s been going really well,” he says.

He has also enjoyed discovering Sweden and familiarising himself with its people, culture and customs.

“It’s been a good move. I’m really enjoying the football and the lifestyle. The people are quite similar to New Zealand. They’re very open and friendly,” he says.

With the league finishing up soon, Jesse is looking forward to spending the holiday season in Europe but admits that he’ll miss the sunny skies of Tauranga.

“It’s zero degrees, so I won’t be spending Christmas on the beach!”